Urvashi Sahni is a social entrepreneur and educationist of 25 years standing. She holds a Master’s degree and a PhD from the Graduate School of Education in UC Berkeley, USA.

Urvashi Sahni founded the Study Hall Educational Foundation which runs three k-12 schools in and around Lucknow, India. The schools reach out to over 6000 students in rural and urban areas, more than half of them coming from extremely poor and challenging backgrounds.

Ms Sahni has worked in curriculum reform, teacher education and school reform all over the country. She uses drama and the arts extensively and has directed and produced several plays with young people. She was awarded the 2010 Ashoka Fellowship for her work with the Digital Study Hall, a program that uses technology to reach out to teachers, teacher-trainees and students from underserved areas.

In 2011 Dr. Sahni was invited as a Guest Scholar at the Center for Universal Education at the Brookings Institution in Washington, DC and she now is a non-resident Fellow with them. She also is a member of Hillary Clinton’s CHARGE commitment to ensure that more girls complete secondary education around the world. 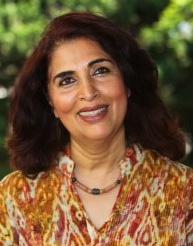