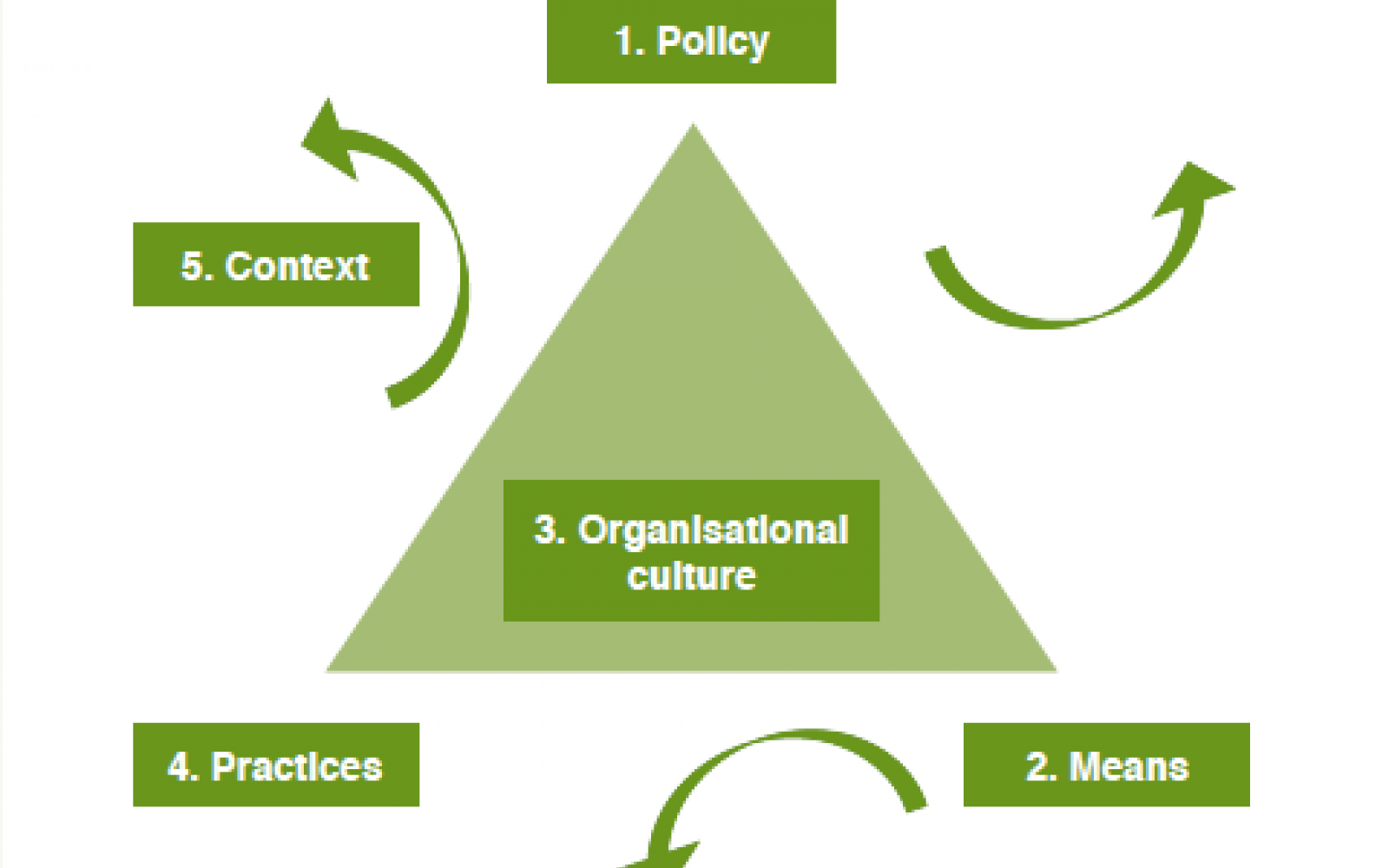 In order to effect sustainable change, it is crucial to develop a gender approach not only in the programmes or projects of governmental and non-governmental actors, but in the whole organisation or institution. The INTRAC triangle provides an interesting framework for embedding gender in organisations and institutions.

When we apply this approach to the challenges of TVET schools/centres to contribute to overall gender equality and to the equality between girls and boys in terms of rights and opportunities to get access and to complete TVET studies, this breaks down as follows:

1. The gender policy of an organisation translates what it WANTS TO DO to contribute to gender justice. It outlines its vision, mission and strategies in terms of choice of the target groups and curricula offered, measures taken and means provided to encourage girls to access and complete TVET studies at the same level as boys and to ensure them a safe environment.

Human Resource Management is an important aspect of this policy, in terms of recruitment of staff, employment conditions, capacity building and personal development.

2. The gender means of on organisation expresses what it CAN DO to contribute to gender justice, in terms of:

4. The gender practice of an organisation defines what it DOES to contribute to gender justice: its activities, results, products, etc.

For TVET schools/centres, we look at concrete measures taken in terms of facilities, offer/curricula, promotion of gender equality, internships for girls, efforts made to facilitate the access and completion of TVET studies by girls, etc.

5. The context takes the different stakeholders into account: target group (girls/boys and their families), Government (policy), donors (and their policies), other schools, NGOs and development agencies, international institutions, etc.

An analysis of the most important stakeholders will provide information that will support the development of appropriate and relevant policies and actions for the empowerment of girls through TVET programmes.

Tool to examine the holistic approach: 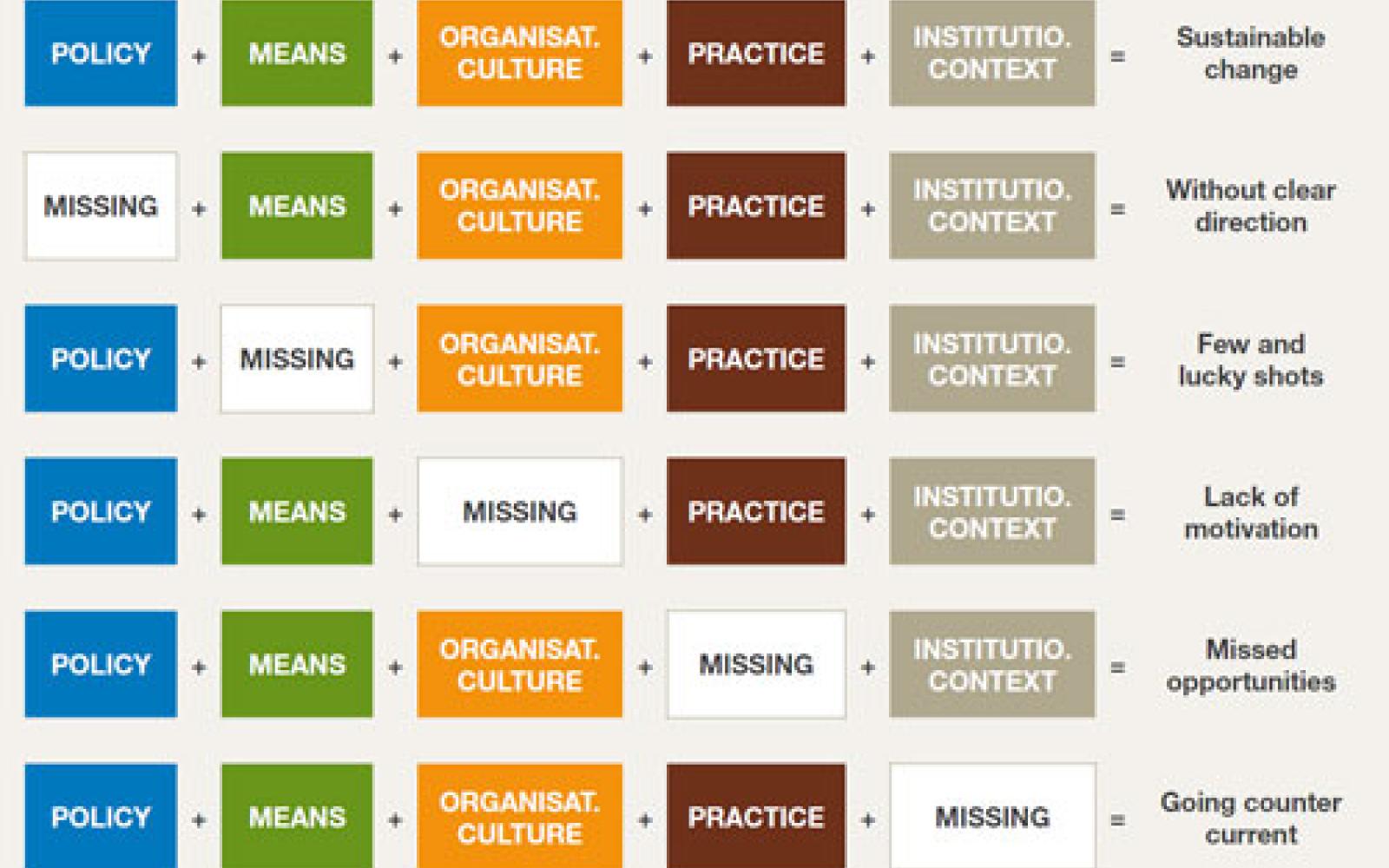 Example: The holistic approach of VIA Don Bosco to gender

In the below case study, the INTRAC triangle approach was used to describe the process towards sustainable changes regarding TVET and gender considerations.

In 2015, VIA Don Bosco commissioned a gender evaluation which examined how and with what results the NGO and its partner organisations in Africa, Latin America and Belgium integrate gender into their practice. In addition to an analysis of current strategies and practices, the organisation also requested practical recommendations to better integrate and consolidate the gender approach in their future work.

The evaluation had an important impact on the mainstreaming of gender in both the TVET centres in the different partner countries as in the organisation itself.

In Tanzania, for example, the local partners decided to formulate a specific result on gender for the 2017-2021 programme. This rather significant decision was informed by (i) the external view and recommendations of the evaluation team composed of a national and international expert, (ii) the evidence-based (data) arguments and (iii) a message brought in a convincing way.

In Latin America, a seminar on “lessons learned” generated a lot of ideas on how to promote gender and proposals to integrate concrete actions for gender mainstreaming into the new programmes of the partner countries.

At the level of the head office in Belgium, both the reflection moments with the programme managers during the evaluation as the continental meetings contributed to an enhanced knowledge of gender concepts and of the gender analysis frameworks among staff.

Programme managers indicated that the gender evaluation provided some eye openers, about the lack of appropriate gender training for the staff, for instance, or the importance of providing lodging for girl students. The responsibility is no longer left with the “gender focal point” of the organisation, but has increasingly become a shared concern of all staff.

VIA Don Bosco has also developed its own gender policy to strengthen and anchor the gender approach in programmes in Belgium and in the South, as well as in its own organisation.

The institutional context of course also played a role. The Belgian Development Cooperation regards gender equality as a transversal topic and is determined to speed up progress in this domain by supporting its partners’ efforts to make change tangible.