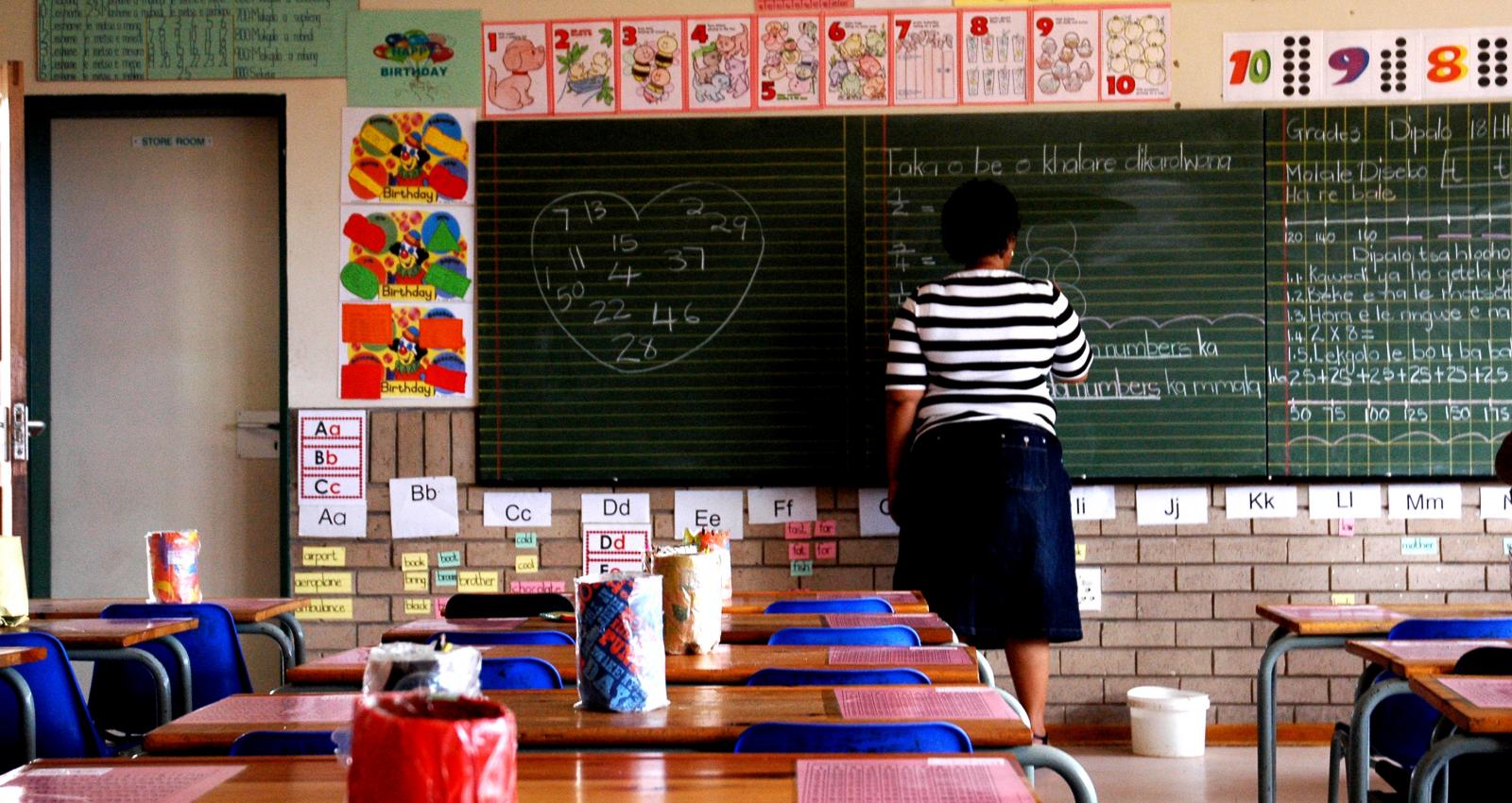 Education and displacement. A recap of the 2019 Educaid.be annual conference

There are more refugees today than ever before: nearly 25.4 million. The challenges these people face are many, the education gap being one of the most pressing. Many governments and international organisations are committed to providing refugee children with quality education, but the circumstances are too complex for quick, one-size-fits-all solutions. Educaid.be dedicated its 2019 annual conference to ‘Education and displacement: Challenges and approaches to providing quality education to refugees and displaced people in the Global South’. The 2019 conference brought experts from across the world and academic spectrum to Brussels to consider the best ways forward for refugee children and their education.

Quality education has the power to transform refugee children’s lives, laying lifelong foundations for both academic achievements and knowledge of basic health care and hygiene, citizenship, human rights and where, how and from whom to get help.

But when it comes to access to education for refugee children, the numbers are dire: the UN Refugee Agency (UNHCR) estimates that only 61% have access to primary education, compared to a global average of over 91%. As they get older, the education gap widens: only 23% of refugee adolescents are enrolled in secondary school, compared to 84% globally. Not surprisingly, the percentage drops to just 1% at tertiary school level, compared to 36% globally.

“In the past two years, refugees have missed 1.5 billion days of school”, said Anna D’Addio at the Belgian launch of the 2019 GEM Report on ‘Migration, displacement and education: building bridges, not walls’ at the Educaid.be conference. “We have to start protecting their rights and make consistent laws. We cannot allow extra barriers to their education, or let their lack of documents hinder enrolment in schools.”

Sharing all seven action points that countries should adopt to achieve their commitments to education refugees according to the GEM Report, Ms D’Addio especially emphasised the importance of acknowledging refugee children’s existence and experiences, recognising their needs and potential, supporting teachers to do so, and the necessity to reform humanitarian and development aid with multisector humanitarian plans based on multi-year funding. These recommendations set a nice framework for the rest of the day. 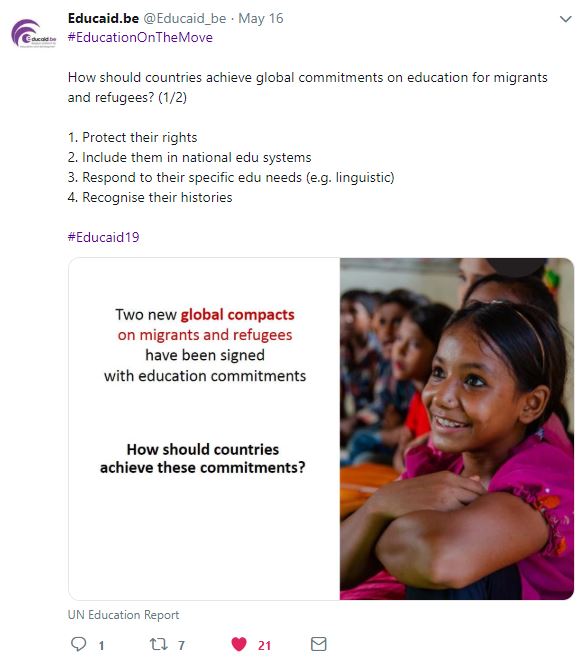 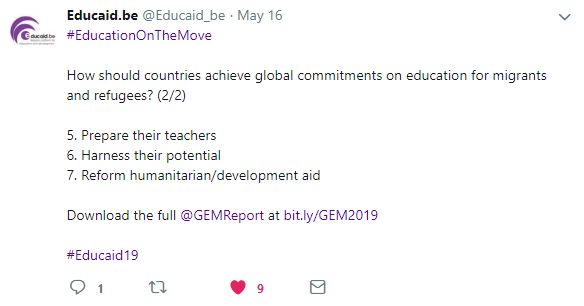 More and better funding is crucial

Let’s zoom in on the GEM Report’s 7th recommendation of reforming humanitarian aid and the development sector to better coordinate with one another. With development cooperation having a long-term funding vision for education, and humanitarian aid having a more short-term vision for crises and refugees, often the two ‘funding streams’ are not coordinated, which makes work all the more difficult for organisations in the field trying to grant quality education to refugees. Moreover, this lack of coordination between the two sectors can lead to the phenomenon of ‘passing the buck’ to one another, with a funding gap as a result.

Speaking from a funder’s perspective, Stijn De Lameilleure of DG DEVCO (European Commission) ensured participants at the conference of the EU’s efforts to better coordinate between different EU departments and institutions dealing with education in emergencies: development cooperation (DG DEVCO), neighbourhood policies (DG NEAR), humanitarian aid (DG ECHO) and foreign policies (EEAS). Find out more about the EU’s commitment to education in emergencies and protracted crises in this 2018 communication.

Shedding light on a few mechanisms and tools

The GEM Report’s concern for better and more funding was loudly echoed by others at the Educaid.be conference:

Finding answers of positivity in host countries Uganda and Rwanda

Moving on to more surprising statistics: Of the world’s 25.4 million refugees, 85% is hosted in developing regions. Of those people, over 25% are hosted in least developed countries, many of which were already dealing with substantial barriers to sustainable development.

Uganda hosts 1.2 million refugees. Educaid.be invited Under-Secretary of Education and Sports Aggrey Kibenge to share how his country manages this in terms of education. His messages in both the morning panel and afternoon breakout session were positive and inspiring, centred around Uganda’s belief that “refugees are a resource, not a burden. It is important that we learn how to harness their potential”. An important strategy that Uganda upholds, is to not forget about education opportunities for host communities too, and to make sure everybody stays on board.

Uganda’s policies on refugee education culminated in an Education Response Plan for Refugees and Host Communities. It has been hailed as a success by the GEM Report for bringing together both development and humanitarian partners.

This constructive approach is not just policy in Uganda, but also practice in neighbouring Rwanda. School leader Jean Paul Sebisogo travelled from his home in the rural district of Kirehe, Eastern Province, Rwanda, to the conference in Brussels to share his exceptional story (read also this interview with Mr Sebisogo):

“In 2015, the UN built a refugee camp in Kirehe, which is now the largest camp in Rwanda hosting close to 60.000 Burundian refugees. In an effort to provide the minors with an education, we expanded our school’s infrastructure considerably in 2016 with support from the Rwandan government. I am now the school leader of 22.935 students: 19.066 Burundian nationals and 3.869 Rwandan nationals. The camp also houses many Burundian teachers. My teaching staff grew with 107, now counting 306 qualified teachers. My direct staff too is enriched with people from Burundi.”

The refugee crisis of the 21st century: Syria

Uganda and Rwanda have regrettably dealt with emergencies in the region for decades. Today’s most pressing and politicized refugee crisis is the one stemming from the war in Syria. Since its onset in 2011, 5.6 million Syrians have fled their country. Around 6.6 million citizens have been internally displaced. Over one third of them are children aged 5 to 17. Experts who have first-hand experience with the Syrian situation shared their insights with the conference’s participants in Brussels.

To set the tone, Jeannette Vogelaar of UNICEF painted a very real picture of the state of education in Syria: about 180.000 teachers are no longer in service. 40 percent of the schools are damaged or destroyed, and many others are being used to shelter displaced people. Yet going to school is imperative for children to have a sense of stability and belonging. Therese Curran, education specialist at the Norwegian Refugee Council, played a short interactive #findme game with participants to make explicit the situation for 2.1 million out-of-school-children and youth in Syria: "All Syrian children have the right to learn no matter where they come from, where they live now and which side of the conflict their parents support.”

To highlight the specific challenges of Syrian refugees’ access to higher education, Racha Nasreddine of the British Council Syria elaborated on how the British Council and its partners support communities through institution strengthening and access to scholarships, language trainings, study skills, mentoring peer networks, e-learning and online qualifications.

For the closing address of the 2019 conference, Educaid.be invited Dr Koumbou Boly Barry. She was previously Minister of Education and Literacy in Burkina Faso, where over 23.000 people from Mali sought refuge. Today, she is the UN’s Special Rapporteur on the Right to Education, using her title to direct attention towards refugees’ right to education, for example in her 2018 thematic report to the UN General Assembly.

Dr Koumbou Boly Barry wrapped up the conference by stressing a few key messages she had heard over the course of the day:

Educaid.be wishes to extend its sincere gratitude to all the invigorating speakers, and everyone who participated. We hope to see you next year for #Educaid20.

Programme, presentations and other useful information about the conference

Video report of the 2019 Conference